COVID-19 Information: Get the latest, reliable information on City of Lompoc services and resources during this time at COVID-19 Local Information And Resources, or by calling the city's COVID-19 information line at: (805) 875-8071. In addition, the Santa Barbara County Health Department can be reached HERE. A county phone hotline for information related to COVID-19 is available at: 833-688-5551 . Lompoc Valley Medical Center has a webpage HERE, and the Lompoc Unified School District can be reached HERE. 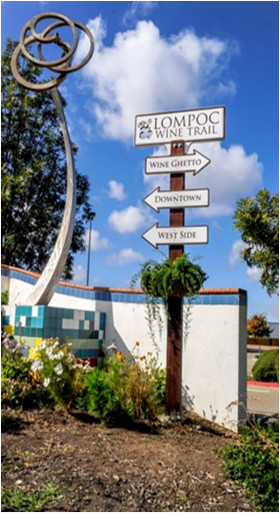 The City of Lompoc, California, is located on the beautiful Central Coast, nestled in the St. Rita Hills, just 55- miles north of Santa Barbara, and just 60-miles south of San Luis Obispo. It is situated near the center of California’s coast, 155 – miles north of the Los Angeles region, and 270- miles south of the San Francisco Bay Area. Lompoc is located on the scenic Pacific Coast Highway, California Highway 1, and has major arteries running through the City, including Highway 1 and Highway 246, connecting the residents to San Luis Obispo to the north, and Santa Barbara to the south.

Just a short ten minute drive to the ocean, the City of Lompoc enjoys a mild year-round climate, with an average daily temperature range from the high 40s at night to a the high 70s or low 80s during the daytime. Year-round, Lompoc enjoys a mild climate with an average temperature of 68.4°F. Located just nine miles from the shoreline, Lompoc is 98 feet above mean sea level. While Lompoc does not show definite season changes, Lompoc sees rainfall during the early months of the calendar year, and highs in temperature, sunny days in the latter months of August through December.

The City of Lompoc is surrounded by chaparral forest to the north, rolling hills to the south, and an open level Valley to the west. Incorporated in 1874, Lompoc has grown from a small agricultural town to a diversified economy with a rich culture focused on tourism, arts, recreation, wineries, and history. Home to 30th Space Wing, Vandenberg Air Force Base, Lompoc also supports an economy driven by technology, innovation, and industry. Lompoc invites people into the city through its attractions such as the historic La Purisima Mission, a vast array of murals located throughout the Old Town Corridor, a world renowned wine industry, activities for all including sky diving, bike courses, festivals, and much more. 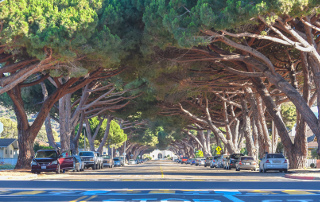 Historically, the City of Lompoc began as a small agricultural community including the prominent production of flower seeds. As time progressed, technology and space exploration aided the City of Lompoc in becoming economically successful. Over the past few decades, Lompoc’s economy has reached a place where it is now known for tourism, its wine industry, space technology, agriculture, recreation, arts and flowers.

Lompoc was first home to the Native Chumash who occupied the area for thousands of years prior to the arrival of European settlers in 1787. The origin of Lompoc’s name derives from the Chumash, with various meanings such as lakes and lagoons. In 1787, Mission de la Purisima Concepcion de Maria Santisima was founded and built at the end of what is now South G Street. While the original mission was destroyed in an earthquake in 1812, it was rebuilt by the Native People at a new location, which now serves Lompoc as a State Historic Park. 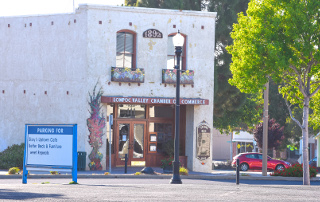 In August 1874, The Lompoc Land Company was formed to establish a temperance colony. On August 13, 1888, the City of Lompoc was incorporated as a California General Law City. Over the course of the next few years following the incorporation of the City, multiple wharves were constructed along the coast to serve as shipping points for supplies as well as a major key for outgoing agricultural products. Shortly after the construction of the wharves, the coastal railroad was completed that ran through Lompoc from the Bay area to Los Angeles in 1901. This industrial accomplishment paved the way for major growth in the city.

In 1896, industries such as the flower seed industry flourished and brought fame to Lompoc. Due to the rich soil, cool ocean breezes for air pollination, and long summers, flowers grew in abundance. Lompoc had over 500 varieties of flowers growing there in the late 1800s. Other industries that prospered during this time were agriculture, and mining of diatomaceous earth.

In 1941, Camp Cooke was established in the Lompoc Valley as an Army training base, which proved to be very successful. In 1958, it became known as what it is today, Vandenberg Air Force Base (VAFB). VAFB paved the way for space technology to be a major component of the City of Lompoc’s economy. By 1944, the population of Lompoc grew to over 5,000 residents. Shortly after the takeover of Camp Cooke by VAFB, Lompoc’s population grew to over 20,000 residents. The base was the first missile base in the U.S. Air Force, and was also home to the Space Shuttle program in the 1980s. While there were a few rocky points along the way, such as the Challenger explosion in 1986, VAFB has become a premier launch facility in California, and remains one of the City of Lompoc’s largest employers and a catalyst of growth in the area. By 1988, Lompoc’s population grew to over 32,000 people.

In 2011, the incorporation of Space X to Vandenberg Air Force Base included a new launch pad and 124,000 square foot assembly building that was built in 2013, and signaled the growth of commercial space launches. The population of the Lompoc Valley has now grown to just over 50,000 residents.

Free viewers are required for some of the attached documents.
They can be downloaded by clicking on the icons below.